I published this article two months ago but Mrs. Watson and I revisited it in a recent Cardinal Cast episode.

I've been reviewing ACT data from our students this spring and I thought I'd share this obvious correlation we see in scores every year.  For CHS, it is relatively known that Trigonometry has a lot of homework with high demands.  It's also relatively known, that completing our Trig course increases ACT scores for students.

Why?   Well, most of the other ACT subjects require students to be good readers with very good comprehension. Reading comprehension is a skill that can be developed, but it generally takes much more time than one semester.  Math is an ACT subject that tests a specific list of skills (mostly Geometry and Algebra concepts) which are generally taught by the end of Algebra II and then repeatedly practiced during Trigonometry class. This repeated practice generates a boost in the ACT Math score of about 4+ points, which in turns boosts the Composite score a few points.  So, in only one semester, students can greatly impact their ACT score!

Fortunately, most of our students complete both Geometry and Algebra II in high school which helps to introduce most tested math concepts.  My suggestion would be for college-bound students to take our Trig course to continue practicing skills with these topics to improve both their Math and Composite ACT scores.

This spring I compared ACT scores of our 28 students that had completed Algebra II but no further math classes, versus the 23 students that went on and completed Trigonometry (I removed those students that had not completed at least Algebra II prior to testing).  The Trig students scored 6.3 points higher on the Math ACT test and 4.7 points higher on the Composite Score.  I've included a random sample of 25 of the students I reviewed just to show the general trend.  The scores highlighted in pink are below the math proficiency rating of the State. The green highlights indicate 'at benchmark' or above the general expectations of the State. 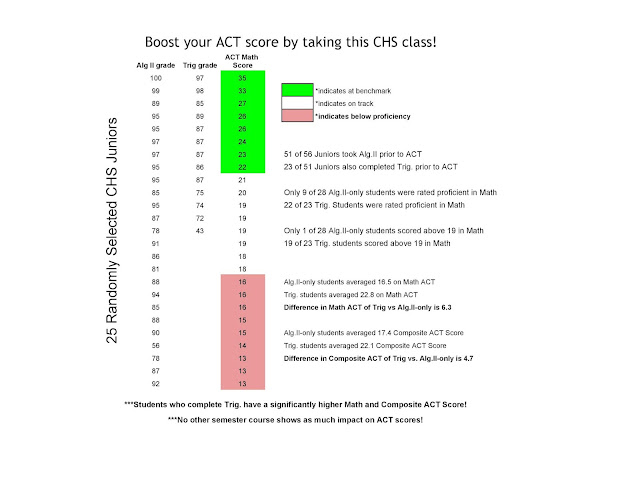 Let me mention college benchmark scores in individual subjects on the ACT, like Math.  Most four-year colleges will require students to complete at least College Algebra for all students. However, if the ACT Math score is not at benchmark, the incoming student will have to take other preparatory classes first, like Pre-College Algebra or even Pre-Algebra.  For instance, Chadron State College places incoming freshman into math classes based on the ACT Math according to this scale:


So, scoring at least a 19 on the Math ACT will save an incoming CSC student hundreds of dollars and additional time to take prerequisite math courses in college.

If your student is serious about college, and would be interested in increasing their ACT score for better scholarship opportunities or to save money and time ...then encourage them to challenge themselves in high school by scheduling these 'harder' courses, like Trig!
Posted by Mr. Mack at 2:02 PM