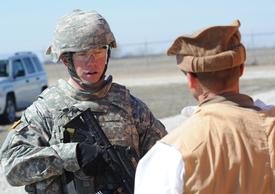 (Lincoln)– A Chadron native beat out four other Nebraska Army National Guard Soldiers during a rigorous three-and-a-half-day competition to earn the title of the Nebraska Army National Guard’s Best Warrior.
Spc. Joseph Pace, a truck driver with Chadron’s 1057th Transportation Company, competed for the title during the Nebraska Army National Guard’s annual Best Warrior Competition, held March 18-21 at Camp Ashland, Neb., and the Greenlief Training Site near Hastings, Neb. The competition consisted of 22 different tasks designed to test the competitors’ military skills, physical endurance, mental stamina and tactical agility.
Pace, a 2011 graduate of Chadron High School, competed in the enlisted Soldier category. He is the son of Joe Pace Sr. of Chadron, Neb., and Deborah K. Pace-Spohn of Haxtun, Colo.
According to the winning Soldier, the title feels pretty good. “It hasn’t happened a lot in the past,” said Pace. “I’ve found something that I’m pretty good at.”
Mostly, though, Pace said simply not quitting was a huge difference-maker for all of the competitors. “Everybody did well. Everybody gave it all they got.”
That’s a pretty good lesson to take from the competition, he added. “If you don’t quit, it will pay off. All those days of getting up at 4:30 in the morning while all your buddies are sleeping to go lift and work out pays off.” “I’m pretty tired, but it’s well worth it. I’d do it all again.”
Pace will now represent the Nebraska Army National Guard during the upcoming regional Best Warrior Competition to be held in Texas in May.
Posted by Mr. Mack at 1:34 PM

The Wildlife Science class ventured to Rapid City to the Cleghorn Springs State Fish Hatchery and the South Dakota Game and Parks Outdoor Campus. The hatchery has been in operation since 1928.  Rainbow trout and Chinook salmon are the major species raised.  Students toured the facilities and observed what it takes to oversee the brood stock, eggs, fry, fingerlings, to "catchable fish" that are released into lakes and streams.   Over two hundred fifty thousand, totaling 70,000 pounds are produced annually. Water quality and facility cleanliness were extremely important.


The Outdoor campus provided education about outdoor skills, wildlife conservation and management practices.  The curriculum focus was restoring wetlands and how to care for riparian areas.  Both facilities discussed career opportunities, essential job skills and educational requirements. The trip was a culminating event for students as they completed the fish (salt and fresh water) unit. 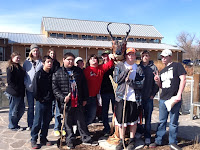 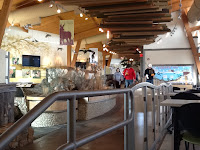 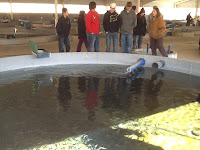 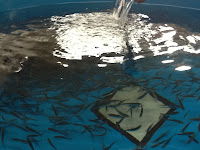 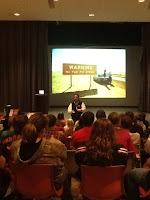 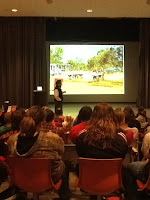 Nebraska native (and cousin of former CHS Art teacher, Jeannie Mohr), Dean Jacobs, presented a program for CHS students about his travels to 52 countries. His presentation was inspiring sharing stories of how people of the world are more alike than different. He had many positive messages for students including, "If you want what's positive in the world, don't wait for it to happen from the top down, it happens from the heart out!"

Thank you to Dean Jacobs, the Humanities Nebraska Foundation, and the Malaika Foundation for providing these opportunities for students. 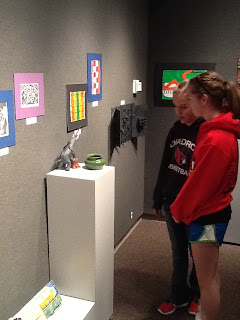 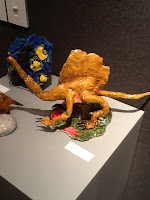 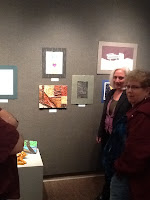 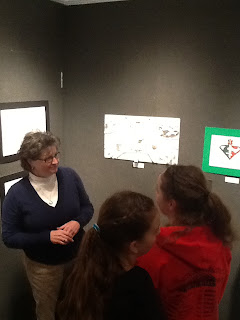 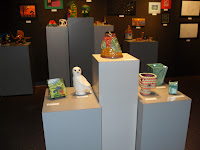 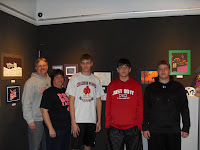 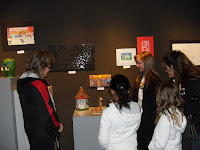 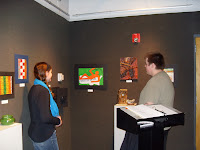 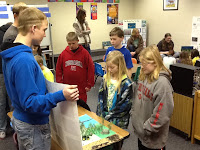 Students orally presented to their peers and then shared what they had learned with fourth grade at the Intermediate building. The high school students used IPADs to show the animal's behavior in addition to the physical models and verbal explanations. Animal topics included: Amur Leopard, Clouded Leopard, Whooping Crane, Bengal Tiger, Green Sea Turtle, Mountain Gorilla, Giant Panda, Black Rhino, Caspian Seal, Orangutan, Chimpanzee, and Zebra.  Students from both buildings stated it was a positive learning experience and would like it to continue. It tied in nicely, as the fourth graders were conducting research on an endangered species as well! A great time was had by all participants! 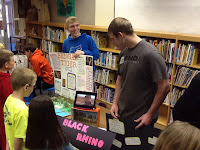 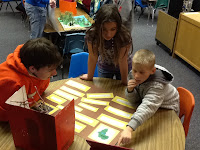 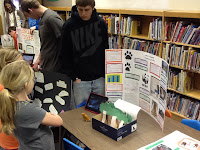 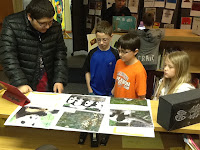 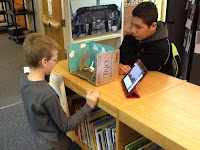 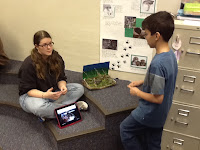 Recently, Mr. Bradley’s Anatomy and Physiology class have been studying the cardiovascular system.Wednesday, March 13, the class was given the opportunity to study the heart first hand. The students were split into groups of two or three, each given their own pig heart to dissect. The pig heart was used because of its close similarities to the human heart in structure, size, and function. The main objective behind the dissection was to educate each student on the circulation of blood through the heart to the lungs and back out to the rest of the body while identifying each major chamber, valve, and vessel in the process.
Starting externally, the first structure of the heart to identify was the pericardium, or thin membrane covering the heart. Once the pericardium was carefully removed, the myocardium, or muscle of the heart, was easily visible. Next, the heart was placed in the dissecting pan in the position it would be in a body as you face it. From here, the four chambers of the heart were located. When looking at the heart, the left atria would actually be the upper right chamber, the left ventricle on the lower right, the right atria on the upper left, and the right ventricle on the lower left. Externally, the major arteries and veins were located the easiest by sticking a finger inside of each and feeling where they branch to. For example, if an opening lead to the upper chamber on the right, you could conclude that the opening was actually the pulmonary vein.
Finally, the fun part began. Scissors were used to cut through the side of the pulmonary artery and continued down into the wall of the right ventricle.  The heart was then pushed open at the cut to examine the internal structure. The four chambers of the heart as well as their valves were able to be explored even deeper with this “inside look”.  First located inside the heart were the inferior and superior vena cava which enters into to right atrium, or left upper chamber. The tricuspid valve, between the right atrium and right ventricle, was located next by its three leaflets and long fibers of connective tissue called chordae tendinae attaching to papillary muscles. Continuing through the heart, the students located in order of blood flow the pulmonary valve, left atrium, semilunar valves , mitral valve, and left ventricle.
Although the book does a fine job of outlining and displaying the heart, learning hands on through a dissection aids the visual part of the learning process. Being able to study a real heart in the classroom was the perfect way to further each students understanding of the cardiovascular system.

RE: Internet Safety Tips
The Chadron Police Department has received several complaints lately that involve the use of the Internet.  The information super highway can be a great tool and asset for adults and school aged children.  However, please remember it is also used by internet predators as well.  Please take the time to go over the following “Internet Safety Tips” and talk with your children to make sure they are using the internet safely.

With the words: “Your Writing Counts” projected on the screen behind him, Jovan Mays, a slam poet, shared an original piece with Mrs. Lanphear English II class. The piece was filled with vivid imagery and lively similes in an attempt to capture the essence of what it means to be a poet—a question he says poets are often asked. 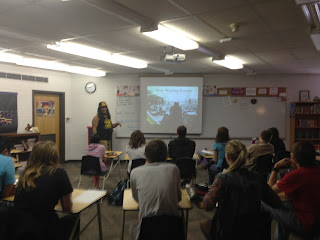 “It is easy, but it is not,” he claims in regard to writing original performance poems. It is easy to free write (an activity he encouraged students to practice daily), but one has to commit to the work. Mays, from Denver, Colorado, is a member of the Slam Nuba competitive poetry team. Slam Nuba’s mission is “to promote the creation and performance of poetry by cultivating literary activities and engaging community fixated on the power of the written and spoken word.” 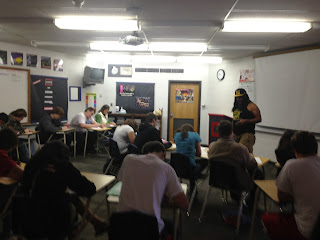 Traveling to Boston, Massachusetts to compete, Slam Nuba became the 2011 National Poetry Slam Champions after performing for more than 2,500 people; in 2012, the team again reached semi-finals at the national competition, this time competing in Charlotte, North Carolina. Individually, Mays has won the City Slam Champ and has a contract to have a collection of his poetry published next year. In his presentation to the students on March 15, 2013, Mays explained that to him being a poet is about blending “truth and techniques.” He helped students investigate poetry while visiting and encouraged them to keep writing their own poems. Chadron High School was lucky to host such a talented wordsmith.
Posted by Mr. Mack at 10:21 AM

Our first fundraiser of the semester to help earn money for our Denver field trip at the end of April was to make and sell four types of gourmet cupcakes. It was a huge success!!! Cupcake recipes were researched, each recipe was cost out for profits and then put into the test kitchen to make any adjustments. A school wide order form was prepared and sent out to all faculty and staff.  Excitement was everywhere in anticipation of these yummy cupcakes being delivered.  Overall, 500 cupcakes were sold, a nice profit was made and requests have come in to do it again for those that missed out.  Our next fundraiser is a St. Patricks day theme meal that is being prepared this week and orders will go out March 14th.  Watch for this fundraiser post and for more details on future fundraising events. 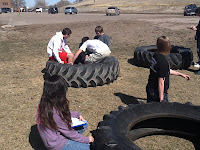 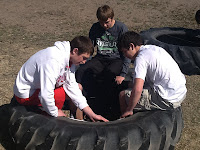 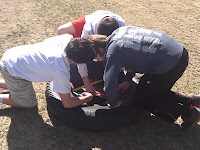 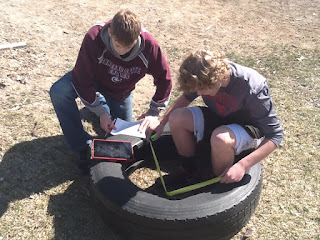 Chadron Public Schools just received word that our curriculum proposal
for Ag education and a FFA program in Chadron High School received
approval from the State. Pending BOE approval at the April board
meeting, this means we have an ag education program and FFA beginning
next fall at CPS. We are able to do this on a "shoe string" because
two teachers stepped up and got provisional ag endorsements. CSC
is offering ag classes our students can take and their staff is willing to
get dual credit endorsements. We have much work before us. Please
celebrate with us and spread the word of expanding ag educational
opportunities for students at CHS.


Cancellation Policy: Cancellations received five (5) business days prior to the first classroom date will receive a full refund. A $25 charge will be assessed on late cancellations.