PALO ALTO, California, April 26, 2018- Next Gen Personal Finance (NGPF), a non-profit committed to ensuring that ALL students leave high school with the skills needed to thrive in an increasingly complex financial world, is pleased to announce two students from Nebraska have received an Honorable Mention Award in their inaugural PAYBACK Challenge.

Each of the 150 national Honorable Mention winners (listed here) will receive a $500 award from NGPF to be used for educational purposes. NGPF will announce the ten PAYBACK Challenge Finalists next Thursday, May 3rd. This essay contest attracted over 500 submissions from students in all fifty states. After playing the award-winning game, PAYBACK, students wrote a 250 word essay with the following prompt:

“How could you use the online game, PAYBACK, to have a conversation with your parent/guardian about paying for college?”

Teachers from over 500 classrooms nominated the best student essay. NGPF staff then reviewed these essays, judging them based on the following criteria:
● Indicates an understanding of key concepts learned by playing the game PAYBACK.
● Addresses concerns their parents/guardians may have about this sensitive topic.
● Takes a creative approach to engaging parents/guardians in a conversation about college.

Each of the Honorable Mention winners will receive a $500 award from NGPF to be used for educational purposes. NGPF will announce the ten PAYBACK Challenge Finalists next Thursday, May 3rd.

“Over 60,000 students played PAYBACK during the contest period,” noted NGPF Founder, Tim Ranzetta. “Reading through hundreds of essays demonstrated how PAYBACK spurred so many thoughtful conversations between students and their parents/guardians. We applaud the educators who provided their students with the opportunity to grapple with these challenging decisions BEFORE they leave high school. Congratulations to the winners and to all those who participated!”

Here’s how a few students explained what they learned after playing PAYBACK:

"After completing the game, I discussed strategic ways to lower college costs with my parents. I presented choices I made during the game, which spurred conversations of how to collectively save money."

"Payback serves as an excellent tool. It showed me that paying for college is not only possible but manageable, and moreover, help initiate the conversation that desperately needed to happen between my parents and myself. College doesn't have to be impossible."

"Payback is a simulation of the real college experience. It shows that college is truly a constant balance of focus, connections, happiness, and debt and that only with the right tools will one be successful."
Posted by Mr. Mack at 6:37 AM

Parents are invited to attend a screening of the documentary "Angst: Raising Awareness Around Anxiety".

Screenings of the 56-minute documentary are Monday, April 30th at 1 PM and 7 PM at Memorial Hall on the CSC campus. Admission is free. To reserve seats, please call 308-432-6302 or email sfrench@csc.edu.

For more information go to: http://www.csc.edu/modules/news/public_news/view/11819

According to press materials, “Angst” producers Scilla Andreen and Karin Gornick have one goal with their
documentary: to start a global conversation and raise awareness around anxiety. Through candid interviews,
“Angst” tells the stories of many kids and teens who discuss their anxiety and its impacts on their lives and
relationships, as well as how they’ve found solutions and hope.
Posted by Mr. Mack at 9:01 AM 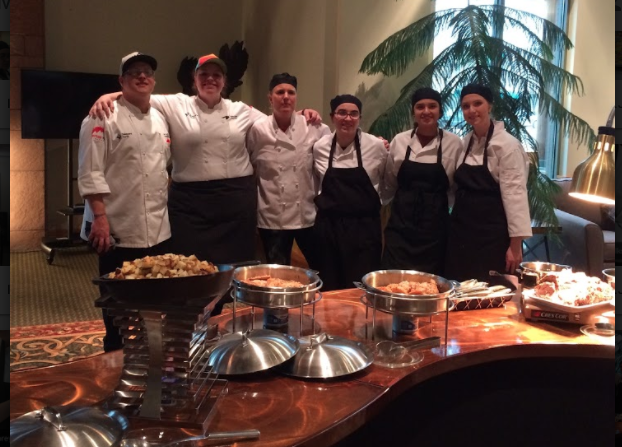 The day began with the students preparing breakfast and lunch, including lessons on poaching eggs and making hollandaise sauce. During a break in the day, the hotel sales manager and executive chef counseled the culinary students on various career opportunities they would have in the hospitality industry. The Ridgeline was also hosting a 55-person banquet that night, so the students assisted with every aspect, from preparation to presentation. 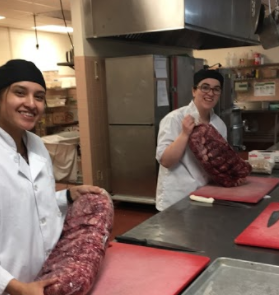 Ending the day on a sweet note, the students worked with the Latitude 105 culinary team to develop the restaurant’s signature milkshake specials for the week ahead. 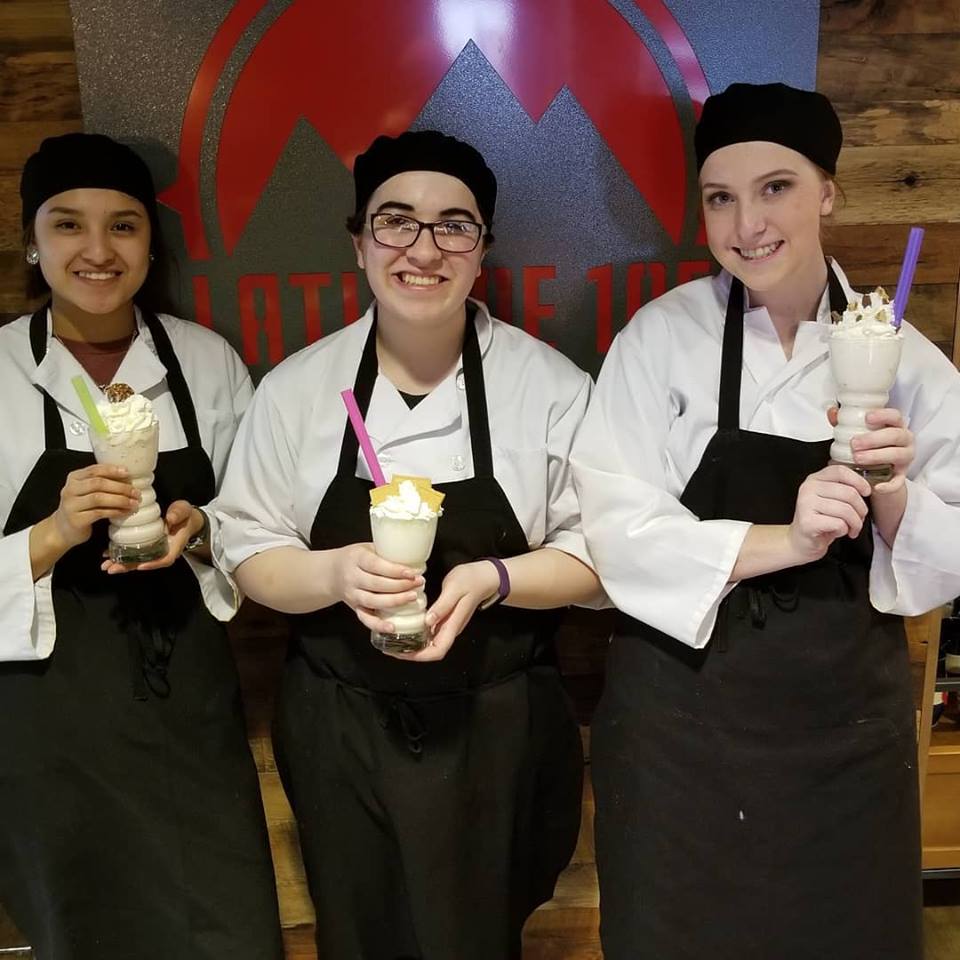 This was a true experience of a lifetime for these students to spend a day in the professional kitchen and learn more about the world of hospitality. “Working at the Ridgeline Hotel of Estes Park was one of the best experiences of my life” Paige Carratinni said. “Not only is my career choice now fully cemented in the culinary and hospitality field, but the interactions, connections, and memories I made in the kitchen are ones I will never forget.” Paige was joined by classmates Aubree Noble, Lindsay Tobacco and their instructor Brenda Budler.

Ag Biotechnology placed 5th out of 24 teams with team members Hunter Hawk and Kayley
Galbraith both placing within the top eight, Madison Cogdill placing 15th, and Tate Ryan placing 17th all
out of 96 total students.

Ag Communications placed 6th out of 21 teams. Hunter Hawk placed first in the web design portion,
Michael Matt placed 11th in video design, Madison Cogdill placed 13th in opinion writing, and MiaKayla
Koerber placed 5th in journalistic writing. This was the first time our chapter had qualified for this event
and were district champions going into state.

The freshman Agriscience team placed 29th out of 107 teams. Allie Watson placed 89th, Emma Cogdill
placed 96th, Ella O’Brien placed 183rd, all out of 417 students. Kadence Wild also was also a member
of the team and helped to the team placing.
The Chadron Agronomy team places 20th out of 109 total teams, with Drew Jersild placing 46th, Billy
Tidyman placing 51st, Cody Madsen placing 61st out of 430 students. Dadi Serres was also a member
of the Agronomy team and contributed to the overall placing.

The Environmental and Natural Resources team placed 63rd out of 105 teams with Tate Ryan placing
105th, Cole Madsen placing 196th, out of 416 students.  Alyeea Lopez and Shannon O’Rourke were
part of the team.

Farm and Business Management placed 25th out of 83 teams. The individuals who made up this team
were Drew Jersild who placed 36th, Clark Riesen who placed 83rd, Kylee Garrett who placed 137th, and
Cole Madsen who placed 162nd out of 326 total students.

Floriculture placed 39th out of 49 teams. The team was made up of Hailey Watson who placed 64th,
MiaKayla Koerber placed 71st, out of 195 students.  Krysta Dawson and Shannon O’Rourke were also
team members.

The Food Science and Technology team placed 10th out of 36 teams. The team was made up of Billy
Tidyman who placed 30th, Dadi Serres who placed 37th,True Thorne who placed 38th, out of 144
students. Pamela Fisher also contributed points as a team member. This was the first time our chapter
had qualified for this event and were district champions going into state.

In the Meats Evaluation competition, the team placed 47th out of 108 teams, with Michael Matt placing
76th, True Thorne placing 189th out of 420 students. Lance Cattin was part of the team.

The Nursery and Landscape team placed 12th out of 24 teams, and was made up of MiaKayla Koerber
and Hailey Watson who both tied for 18th out of 96 students. Krysta Dawson and Alyeea Lopez were
also part of the team.

The Poultry Evaluation team placed 7th out of 23 teams, with Cody Madsen placing 9th, Samantha
Johns placing 35th, Mackenzie Scoggan placing 39th, out of 92 students. Katie Lewin was also a
member and helped with the team placing. This event was new to the state. Teams had to win the
district Livestock Management contest to be eligible to compete.

It would not have been possible to study for all of the events without the help of several volunteers such
as Lucinda Mays, Dave Carlson, Justin Madsen, Bailey Lupher, Jessica Hartman, John Cattin, and
Butler Ag. With so many students qualifying and competing all over town, Amy Hawk and Jim O’Rourke
road along and helped out as additional chaperones.

All in all, the Chadron FFA Chapter had a very successful year, and is sad to see it come to a close.
Young members within the group will have some large shoes to fill this coming year as 12 senior
members will be graduating and moving on. Many of these seniors have been members since freshman
year when the club was first getting started, and have been excellent influences by contributing to and
teaching the younger members. The chapter will be holding its annual celebration banquet on April 29th
as new officers will be taking over. This year has been a wild ride full of new accomplishments,
experiences, and memories. 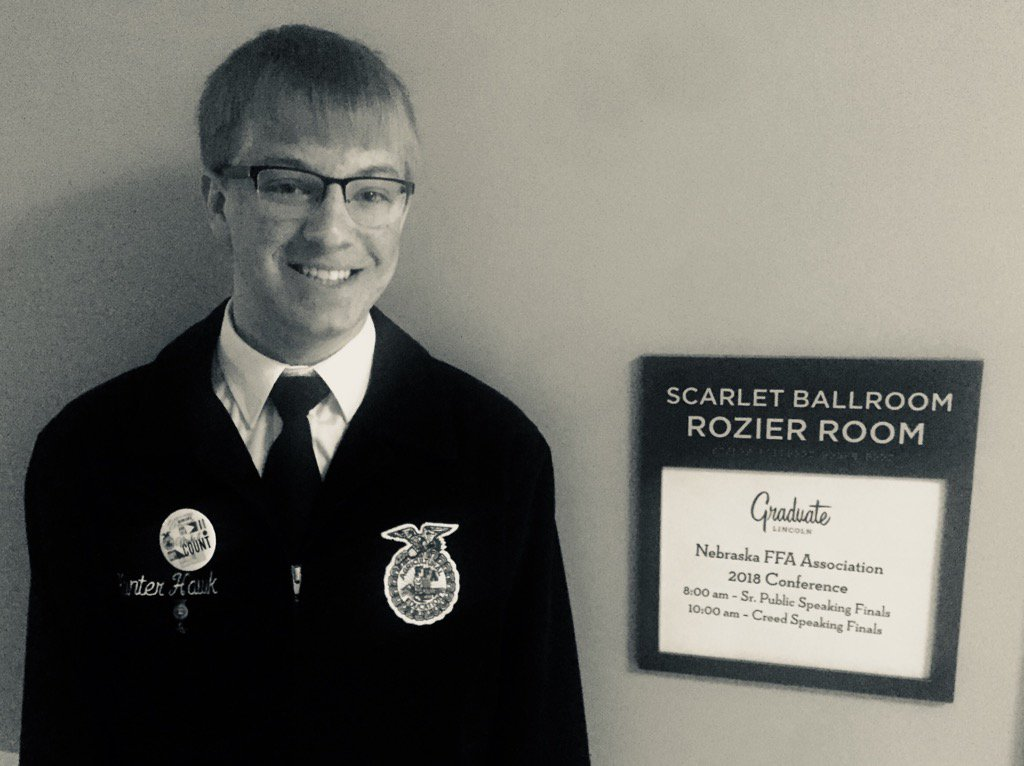 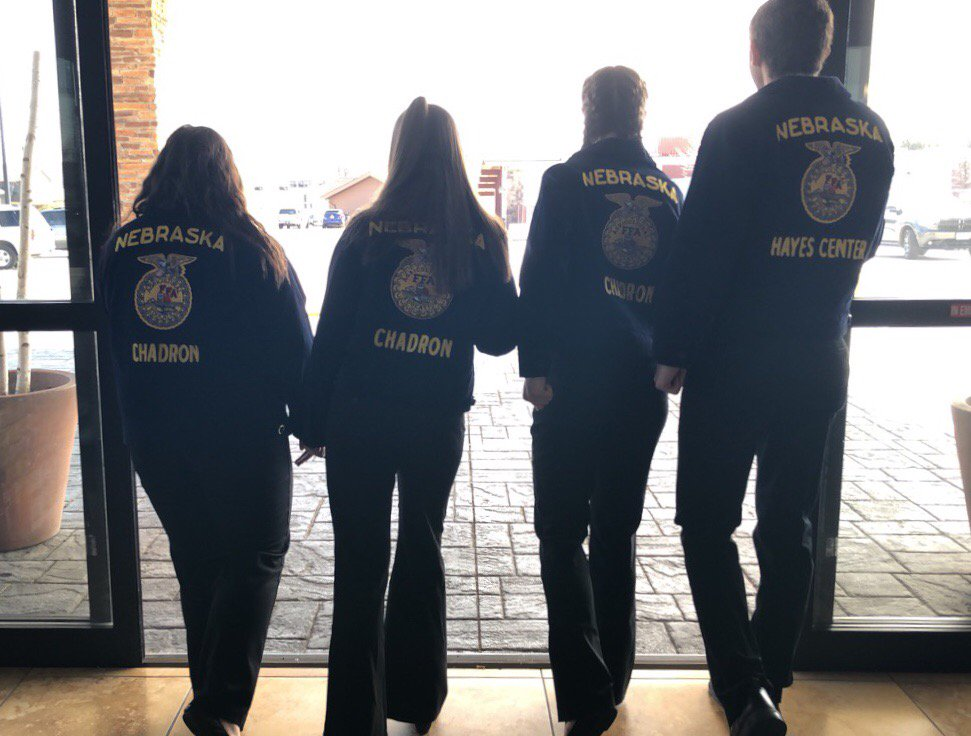 Seniors MiaKayla Koerber, Dadrianna Serres, Pamela Fisher and Billy Tidyman get ready for their
last state convention. Chadron FFA had 12 seniors who have contributed greatly to the successes
of the chapter.

Join NASA for the Insight Launch at the Chadron Public Library Apr. 24th 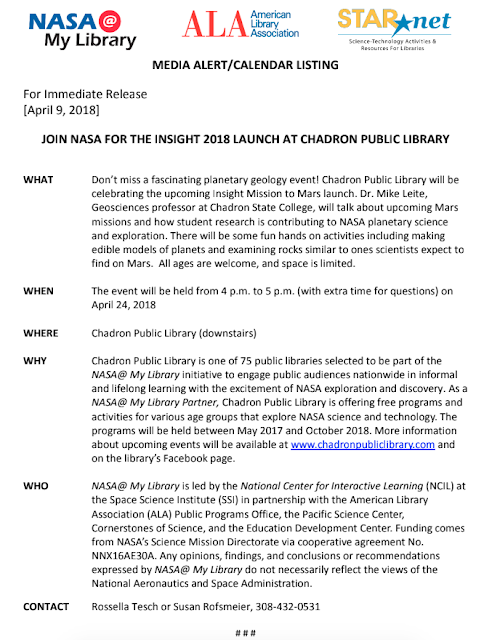 The school nurses are sending home a sports physical form. We request that parents/guardians fill in the Health History and sign permission at the bottom of physical form.  Then return the completed form to the high school by April 20, 2018 along with $5 donation.

Your student MUST have the form signed and returned to receive a physical.

Any student that intends on participating in any sport or extracurricular activity for the 2018-19 school
year must have a current physical turned into the school.  The Chadron Medical Clinic providers are
giving an opportunity for your student to get the physical done at school.

Your student MUST have the form signed and returned to receive a physical.  If the form is not completed and signed by the parent/guardian, the student will not receive a physical. All physicals will be done in the High School locker room/concessions area (north side).

If, for a reason given by the medical provider, your student is NOT cleared to participate and needs
“follow up”, the school nurses will notify you.  If your student has a conflict with the morning that is
assigned for her/his grade, let us know and we will get them in on the other day!

The providers will NOT be completing club softball, baseball, boy/girl scouts or any other non-school
related physicals at this time.

We are so thankful to our community providers and families for making this opportunity available for our
students.  If you have any questions/concerns, please don’t hesitate to contact us at the school.
Hope to see your student/s there!

There will be no school today (Friday, April 13th) for Chadron Public Schools due to forecasted snow and wind. Activities scheduled for the day are also cancelled or will be postponed.
Posted by Mr. Mack at 4:36 AM

To Subscribe to HS Text Reminders -- Including School Closings ...

If you would like to subscribe to Mr. Mack's high school text message notices, simply text the message "@chsnote" to the number 81010.

This will allow you to be one of the first to be aware of school closings or schedule changes. 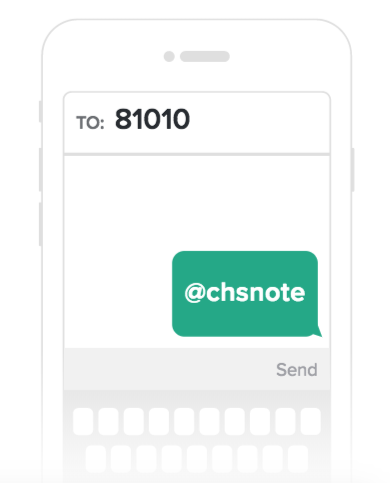 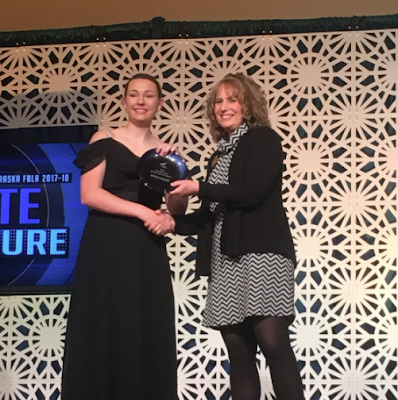