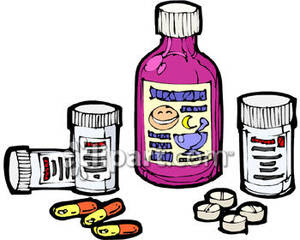 We need to inform parents that we can no longer provide ibuprofen or acetaminophen (tylenol) upon a parent's request.

There are two requirements before a student can take or have medication at school:

So, with a signed consent form, parents can bring small amounts of ibuprofen or tylenol which will be stored in the student's name and provided when needed.

Guidelines for Administering Medication
Whenever possible your child should be provided medications by you outside of school hours. In the event it is necessary that the child take or have medication available at school, the parents/guardians must provide a signed written consent for the child to be given medication at school. A consent form is available at the school health office and on the district website. Medications must be provided to the school by the parent/guardian in the pharmacy-labeled or manufacturer-labeled bottle. Repackaged medications will not be accepted. All medications also require a physician's authorization to be given at school. The school nurse may limit medications to those set forth in the Physician's Desk Reference (PDR). Please limit the amount of medication provided to the school to a two-week supply.
Posted by Mr. Mack at 2:58 PM

Help Our Sophomores Raise Money For Prom and Graduation!

Help us raise money for Prom and Graduation!

The annual sophomore fundraiser is underway!  These funds are used by the current sophomore class for prom and graduation. There is an extensive list of print and digital magazines as many gifts for purchase.

There are two ways to participate:

40% of all sales go directly to the CHS sophomore class account. Donations are also accepted at the CHS Office. Please make all checks payable to Chadron High School.

Thank you for your support for our students!
Posted by Mr. Mack at 8:59 AM

To support the effort of the Chadron Public Schools' Board of Education and the Office of the Superintendent, I thought I'd share this information. The Chadron School Board has been very active in educating the public as well as political leaders of the challenges in fairly funding schools across the state. The following is a summary of information sent to media outlets recently on behalf of our Superintendent with the support of our School Board.

The spike in agricultural land valuations has lessened the State of Nebraska’s constitutional obligation to support (fund) public schools, shifting more of the cost to local property taxpayers.


The shift is particularly intense in the Chadron Public School District where more than 40% of our property is non-taxed (ex. federal and state lands). This results in 10% of our residents paying 40% of the property taxes.


The following are comparisons from the 2006-07 school year to the current 2015-16 year according to data from the Nebraska Department of Education as well as the office of the Superintendent of Chadron Public Schools:


The Nebraska Legislature’s Revenue and Education committees will discuss school funding and property taxes over the next couple of months and citizens are encouraged to contact state senators to share their concerns regarding this data.  It is the legislative responsibility to address property taxes and public school funding, by making your voice heard, you can help lawmakers understand the urgent need to take action regarding these challenges.
Posted by Mr. Mack at 3:14 PM

Chadron High School Parent-Teacher Conferences will be held this Thursday (September 17th) from 5:00-8:30 in the High School Commons.
Posted by Mr. Mack at 3:13 PM

Has the Easter Bunny arrived in September????

After the activities were finished (without any injury), the students calculated their speeds.  One activity that added "flavor" to the calculation was the "chomping of gum".  If you're curious about these activities, find a current CHS Physical Science student and ask them:  "What in the world did you learn in PS today???"