On Friday November 12th and 7 PM the Chadron High School one act team will present their performance of their competition piece “Crimes at the Old Brewery” by Tim Kelly. 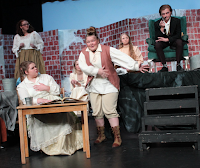 The play is set in in the mid 1800s in a tenement house in New York City, where murderers, robbers, and assorted villains rule. Jack O’Lantern, the head of the criminals, rules the tenants. No crime is too much for him. Complications arise for this leader when the “Illustrated Police Gazette” plants a reporter within the Old Brewery that informs the public of the wretchedness of the building.

When Jack kidnaps the beautiful Irene Felton he makes a fatal mistake. The Committee for the Suppression of Crime and Vice decides the building must be destroyed. When Jack tries to solve the problem to his own benefit, the walls come tumbling down. 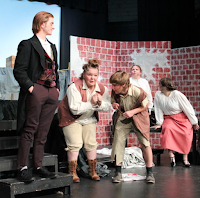 The Old Brewery is not a fictional place. It was a condemned brewery in 1837 and transformed into a tenement house. Some accounts state that over 1,000 people were crowded into its walls. The building was located in New York’s toughest crime area, the notorious Five Points District of Lower Manhattan. Public outrage and the “Illustrated Police Gazette” caused The Old Brewery to be torn down in 1852. 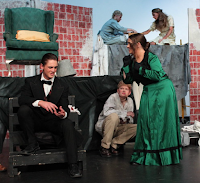 The play will cost $5 and will include an all you can eat dessert bar.

The one act team will also perform in Alliance at the Western Conference Meet on Saturday Nov. 13 and the Gering Bulldog Festival on Nov. 20. The team’s district competition will be Saturday December 4 in Gothenburg against seven other teams.

Crimes at the Old Brewery

Residents of the Old Brewery: